Bullying is abuse and mistreatment of someone vulnerable by someone stronger or more powerful. Everyone is vulnerable. It is now an epidemic and awareness has been heighten; be vigilant and knowledgeable of its forms. It occurs in schools, social settings and the internet. With its lasting psychological effects, it affects victim’s emotional wellbeing. Bullying can be subtle, know the signs. Bullies yearn for both attention and love as a result they feed their deficit and void through the pain of their victims.

According to Dosomething.org in the US, “one out of every five students between ages 12-18 has been bullied during a school year. Approximately 160,000 teens have skipped school; commonly reported type of bullying is verbal harassment (79%).” 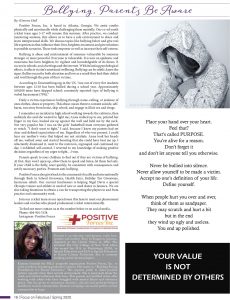 « Spruce up your outdoor spaces
Refresh your child’s diet »