Passion for Pregnant Mothers of Africa

Passion for pregnant mother’s of Africa

Monica’s passion is for the pregnant mothers of Liberia. Liberia is a country in West Africa that has endured 14 years of civil war with a population of around five million. In 2006 Liberia had the highest death rate in maternal modality in the world. As one of the victims of Africa’s modality she experienced what it felt like to not have care during pregnancy.  As a young mother who lost two children before birth, she is confident that with the proper prenatal care she would have completed a healthy full-term pregnancy and her babies would have survived. “One of my ultrasounds showed my baby was dead. I had to do a C-Section to deliver the dead baby inside of me that had been that way for about 24 hours, and I had no idea. Many of the pregnant women only receive folic acid and iron during their pregnancies.  But this basic prenatal care is often isolated to the major cities, leaving the surrounding villages without this option,” she told us. 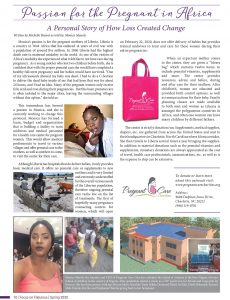